It was raining, I needed to clean and get caught up on laundry. We stayed home in our pajamas all day and the kiddos helped me clean … which took three times as long as it would kid-free, especially when there are two toddlers fighting over who gets to vacuum and climbing in the dryer. It was a productive lazy day; we deep-cleaned the kitchen, caught up on the laundry (and even folded and put things away as soon as the dryer shut off), and put the flannel sheets on the bed. Love flannel sheets.

Sun! There was a break in the weather and I woke up to my phone vibrating with a message that one of my mom friends and her son and another little guy she watches were going to Dr. Maze’s Farm in Redmond for the morning. We had nothing else planned (well we did, we have a tentative music class every Wednesday but when there’s sunshine, I’m not taking the kiddos to sit indoors) so we got up and going so we could make our way over there. For a random pumpkin patch off a busy Redmond road, it was a ton of fun. There’s an area with several activities for the little ones; goats to pet, rubber duck races, bouncy horses to ride, homemade musical instruments to play, a spiderweb-looking rope thing, a super cheesy automatic chicken puppet show (that the owner’s clearly play up its cheesiness), haystacks to climb, saddles to ride … all sorts of fun stuff.  And of course, pumpkins and a corn maze. I had emailed another mom friend and she and her three kiddos came too so there were plenty of little friends for Blaise and Laine to interact with. Not many pictures of Lainey Bug, she kept going between the backpack carrier and down (she’s indecisive). 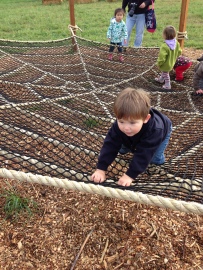 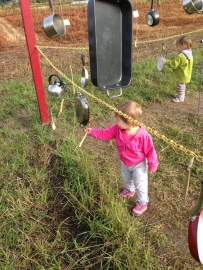 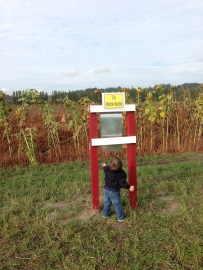 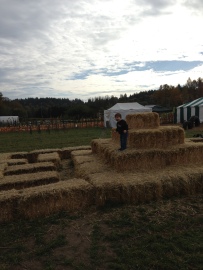 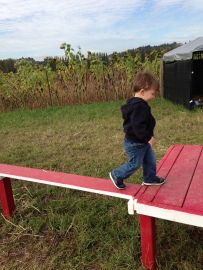 I had planned on going to Costco Monday after our park visit but with super muddy kiddos, that plan got nixed. It didn’t happen Tuesday either. After Dr. Maze’s, we met our friend Mike for lunch at Red Robin in Woodinville, then went to Costco. I needed two things. An overflowing cart later, the kiddos and I loaded the back of the van and headed home. We skipped naps that day since it was close to 4pm when we got home so we sat on the couch and relaxed to The Backyardigans. I think Laine was in bed by 6pm that night, maybe it was 5:30pm. Blaise didn’t last much longer either.

More sun! I’d been wanting to check out Gene Coulon Park for a while, and since I needed to hit IKEA, I suggested to our friend we made park plans with to meet there. She needed to hit IKEA too so it all worked out well. The park is awesome; it’s on Lake Washington, near to Boeing (you can see airplanes, a hit with my two), and the play area is amazingly good. The birds though, they must know kids come with snacks because they went through my stroller and I saw them steal snacks from other strollers too, including my friend’s. Sneaky little suckers. I also ran into our cats’ former vet technician … one of the moms looked so familiar, thinking I recognized her from our doctor’s office, I asked and she said no but she had worked at Meadows Cat Hospital. That’s a bingo. And when she asked my cats’ names, she immediately recalled our last name. I’m always amused at little things like that, small world and all (yeah, still amused even in the same neck of the woods). 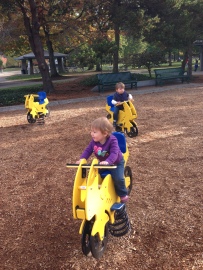 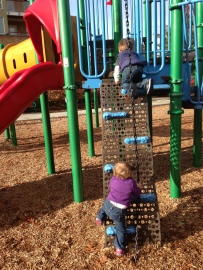 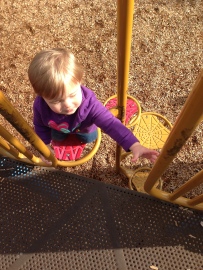 IKEA was a success. We had four kiddos—all within 14 months of each other—and we had no tantrums or meltdowns (Laine did briefly think I was going to ship her to Sweden when I left her to buy lunch). I was able to get what I went for, as did my friend. After two hours of IKEA-ing, we left for home. We cut it close with naps; if Blaise isn’t in his room by 2:30pm at the absolute latest, he doesn’t nap. We got home at 2:15pm and I quickly ran him up to his room and the little guy was out cold right away. Laine napped on the way home and when she naps in the car, be it two or 60 minutes, she thinks she’s napped for the day. She and I had some fun mom-daughter time while brother napped.

We had big plans for a while to head up north to visit a friend and her little gal, and planned on picking up another friend and her two little ones on our way. That plan changed Thursday night after Laine woke up with a temperature of 102.8 degrees. She had been fine all Thursday, playing and eating normally, then this mysterious high temperature. She was down to 101.6 degrees Friday morning and it varied throughout the day and into the weekend. Needless to say, we stayed home Friday. The highlight of the day was when delivery guys dropped off two chairs I purchased that came in large boxes. Best toy of the week.

Laine’s temperature was still fluctuating so the kiddos and Brian stayed home while I went out to do mom errands. After my bi-weekly pedicure with a friend, then lunch, I went to Lakeshore Learning to stock up on indoor kiddo entertaining supplies before the cold winter hits. My new favorite store. I’m not a shopper in that I like to take forever to look around; I like to shop knowing exactly what I need. I think I spent close to an hour there. I made out with a ton of great stuff, then went to Michael’s to pick up a few more items. The kiddos had a fun day with dad, despite Laine having an off-and-on fever and being moody. Blaise was cute, I had purchased a Blaise-only item and told him he could play with it once Laine went to bed (this was about 15 minutes before her bedtime). He went over and kissed her goodnight and waved to her. He really wanted to play with his new loot!

This is sad. I literally just forgot what we did yesterday. But it came to me. Laine was still down with a fluctuating temperature so it was another home day for the kiddos. I had my monthly running event (I’m participating in some sort of running event each month as a personal goal). I left early in the morning just as the kids and Brian were getting up for the day. I ran my event, went to brunch with our friends, then came home just in time to kiss the kiddos before naps. Brian and I switched parent duty and he left to meet a friend for coffee, and was back for dinner with a pizza. We had a lazy evening before the kiddos went to bed and we watched Dexter while I worked on a freelance project (I do graphic design work now and then).