April flew by and it’s already almost mid-May. We kept busy with many outdoor outings, playdates with friends, Brian’s mom visiting, and our regular classes. May is already booked between classes, playgroups, playdates, family visits, and a few other fun things. The year is moving fast; it’ll be Christmas before we know it. In the meantime, here is some of what we’ve been up to (in random order) since the last Recent Happenings post.

We haven’t official stopped co-sleeping and have no plans to stop until they decide to. We all start off in our respective beds, and all end up waking up either in the same place or someone else’s bed (or floor—Blaise). Captured in the past few weeks below is Blaise whom we found in our bed one night when we went upstairs to go to bed (and a yawning Leilah) and Laine who manages to make her way into our bed sometime in the early morning. I didn’t know she was in bed with us until I woke up and found her and her gang of babies.

Blaise has long loved the pink hat, and loves to wear it everywhere (as you can see from a few other pictures in this post). He’s now incorporated the purple purse that he fills with trains and cars. Quite the fashion statement, and one that usually gets compliments along with a few “looks.”

We’ve gone to three Tiny Treks classes since I last updated. We learned about salamanders at Redmond Watershed; eagles at Idylwood Park; and cows at Farrel-McWhirter Farm Park. Salamander day made me wish I had child leashes even though I’ll never use a child leash … two kiddos running in different directions, ugh. Eagle day was fun. They had a blast at Idylwood Park, which is one of our favorites. Though as we were leaving, Blaise told Laine to stay and wanted to leave her behind. He wasn’t thrilled when I said we had to take her home with us. Cow day: mistake on my part, I talked up that they were going to see a baby cow. When we got to the park, Blaise had no interest in the art project or circle time. All he kept saying (as he was walking toward the farm) was, “Baby cow!” It was a rough day to begin with; leaving home I had a headache that I thought was going to be a migraine but forgot to do anything about it. Second mistake of the morning. It turned into a migraine and I wasn’t up for fighting the kiddos to leave our favorite park. I tried to stick it out but it was time to leave right as they were walking in the water. And of course they didn’t want to walk with wet shoes … we eventually made it home, and had an extremely lazy afternoon of me lying on the couch while the kiddos did whatever they did. 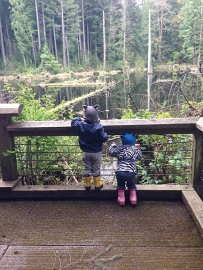 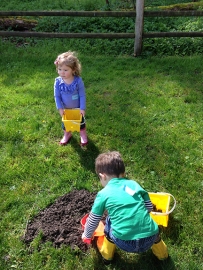 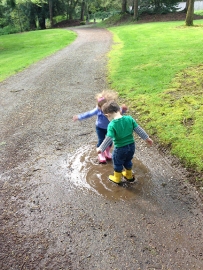 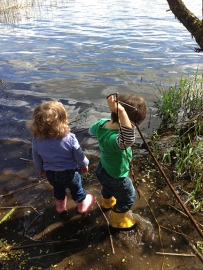 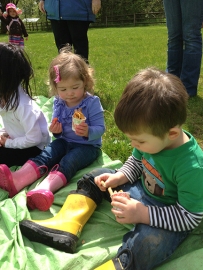 We’ve had nice, summer-like weather and the puppers had cabin fever so we piled into the van one morning and played at the dog park. The pups were ready to go before the kiddos were, but they were troopers and sniffed around some more while the kiddos played in the sand and dirt. I’m not really sure why Laine thought it’d be a great idea to take a few moments to lounge around on her tummy; maybe she thought she should lie down like Mayah and Leilah. The dog park is always successful because I get home with 12 tired legs. 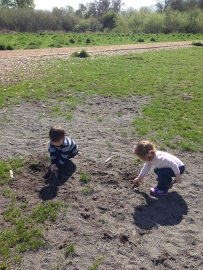 Turns out a really great way to get a non-napping two-year-old to nap is to take him on a 2.2 mile hike (thanks, Garmin). When we learned about salamanders in our Tiny Treks class, we met at the Redmond Watershed. I wanted to go back and check it out. It’s a little secluded, so not wanting to go alone (just in case a toddler tumbled down a hillside I’d have backup) our friend, Mike, often runs around there so he came along and was our tour guide and Laine’s personal carrier for when she didn’t want to walk (she can suck you in with her innocent look). 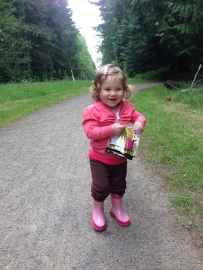 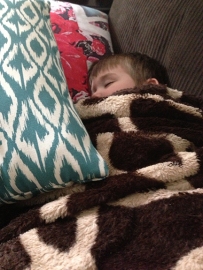 I usually avoid going to playgrounds in lieu of open spaces or trails. It’s easier to keep track of two kids and they run around more instead of repetitively swinging or sliding. I switch things up on them once in a while, so I tossed them in the van and took them to Marymoor. If we go the playground route, I like ones that aren’t near parking or roads, hence the Marymoor pick. It’s a nice little park, and the kiddos had a blast. Except for the inevitable … after 2.5 years, he finally got hit from running behind a swinger. He took it well, and there was no mark so we can check that childhood “milestone” off his list. 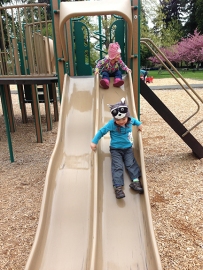 Brian’s been taking Laine to music sans Blaise (he’s not a huge music class fan). Laine loves music; she gets her dance on. Blaise and I joined them last week. 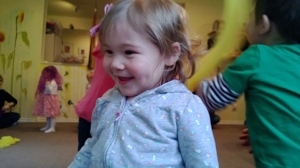 Laine was all about having a flower in her hair after picking some on a trail walk. I’m sure Blaise would have loved one too but he was busy running ahead. 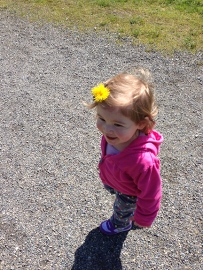 We made a trip down to North Bend for an early dinner and a little outlet shopping when Brian’s mom was in town (shopping for the kiddos of course!). Their idea of shopping was riding the rides that are strategically placed outside of Carter’s, Gymboree, and Stride Rite. 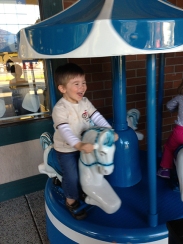 Seattle has an indoor sand volleyball place that offers toddler time on weekday mornings. Talk about a great time. Laine wasn’t channeling her California genes and didn’t like walking on sand at first, then warmed up and didn’t want to leave. Any place that has trucks is a win in Blaise’s book. 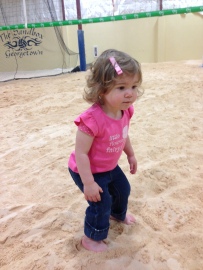 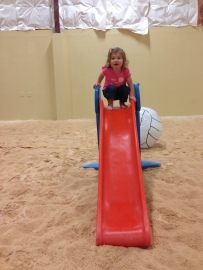 Laine not sure of the sand; then she saw a slide. 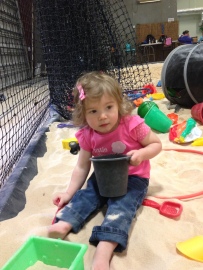 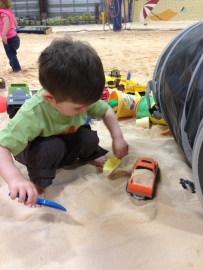 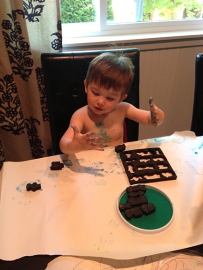 Stamper Blaise, not a fan of ink on his hands; “iTad” Blaise, obsessed with the iPad. 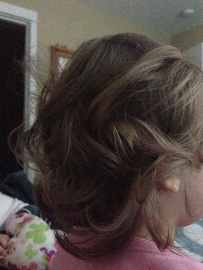 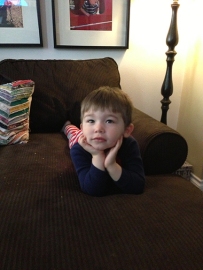 One of our friends whom we have regular playdates with met us at the East Lake Sammamish Trail for a walk in the sunshine. I hesitate calling it a walk since I think we walked maybe a half mile … the kiddos were all about digging and rock collecting. Which was fine by us moms, dirt play is always a good time! 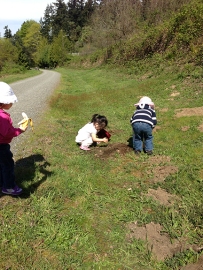 Zoo—Two Trips in One Week

We made a date with our friend with two little gals to head over to the Woodland Park Zoo in Seattle. It was a gorgeous day, and the zoo wasn’t very busy which was nice. I don’t know that the kiddos cared much about the animals—the zip line, carousel, and grassy hill were the hits of the day. Laine was funny, whenever I’d lift her up to see whatever animal, she’d say, “No, no, no, no, no.” I guess she thought I was going to give her away to the animals. Our second trip was two days later with Brian’s mom who was in town visiting for the weekend. It was another super sunny day, so the zoo again it was. Again, more interest in running around than the animals. Seeing the grizzly bears up close in the water was pretty awesome. 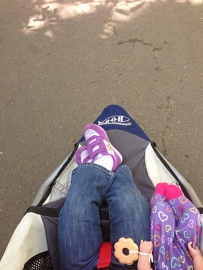 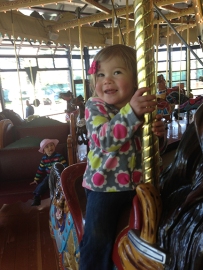 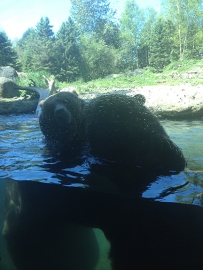 Brian has been at Microsoft five years. Five years?! That means we’ve been in Washington seven years now. In typical Brian fashion, about a week later he remembered to mention the award. He’s so nonchalant about things. He also celebrated another promotion last month. It was actually pretty funny, one morning he said he felt he really needed to step it up at work then came home the same night and said he was getting a promotion. He clearly holds himself to a higher standard than need be. Go, Brian! 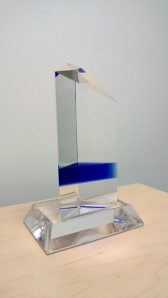 Mayah had her free six-month check-up thanks to her health plan … $500 later, she had an infected tooth removed, her annual Cushing’s Disease blood test, and left with a bag of medication. The great news, at almost 13-years-old, is she’s in great health and her daily Cushing’s Disease medication is continuing to maintain her levels in the normal range. Awesome! Though we do wonder if her hearing is going or if she’s become even more selective.

A year ago I would have thought I was nuts, and that it wasn’t even an option to homeschool but after a year of thinking, learning, reading, and talking about it, we have solidified our decision to homeschool the kiddos. Not in the traditional conservative, religious way—we’re liberal atheists. We have a myriad of reasons, the main being we think it’s what’s best for our little ones. Compulsory education and one-size-fits-all curriculum doesn’t fit with how we want our kids to learn. There is a great local homeschool co-op that offers classes, and we have public and private schooling options if/when the kids want to attend school. We’re pretty open, and will take it day-by-day, year-by-year and discuss if it’s working for all of us and what all options are. I’ve watched this TED Talk over and over, and I can’t think of a better way to express how I feel.