I remember my mom opening the blinds every morning. It was the first thing she did when she’d come downstairs. Then she’d make the bed, feed the cats and dogs … the list goes on. I never really thought about all that goes into running a household, things just magically happened growing up. And before having kiddos, it was just stuff we did without thinking much about it. Now with the added bonus of toddlers, I’m becoming more and more aware of all that goes into running our house. A rundown of the typical morning around here:

Push snooze when my alarm goes off at 5am. Run this morning or not? … usually not.

Wake up from my hour-long snoozing to Laine saying, “Downstairs, please.”

Unplug charged cell phones, fan we sleep with for white noise, and hall nightlight so there’s no temptation to play with electricity (the kiddos, not Brian and me).

Open blinds and windows in the kiddos’ room; open blinds in our room.

Take gate down from our bedroom door (used to restrain pups during the night).

Race pups downstairs to beat Mayah to the overnight litter box because, as she occasionally reminds us, she is a dog.

Sweep litter that escaped the box, with Laine’s “help.”

Take pups out, again with Laine’s “help.” And by help, I mean she stands outside and dictates to the pups, “Mayah, Leilah, go potty!” Then provides a rundown of what the pups do.

(Really, everything from here on is with help from Laine if she’s not playing … so it takes double the amount of time but who can pass up help from such an adorable assistant?!)

Feed pups, Mayah in her crate and Leilah in the dining room; refill cat food dish.

Check on Leilah’s breakfast progress. She isn’t an eater, so Mhoose will swipe her food if she doesn’t eat but she doesn’t like him doing that. If she hasn’t eaten, put her dish away. (I went through an “h” thing when spelling our animals’ names. Worm is actually Nurmahl (Garfield reference) but it morphed into Nurmie, then Nurmie Wormie, and finally Worm years ago.)

Let Mayah out of her crate, watch as she and Laine inspect Leilah’s breakfast area and around the dog food container for stray morsels.

Offer Laine the option of milk or water, then wait about five minutes while she makes this extremely difficult decision. Watch her open the fridge, see what all her options are, decide which sippy cup she wants, then listen to her final selections. Then wait five more minutes until she realizes she thinks she made the wrong decision and asks for the other, then tell her she can have the other when she finishes her first pick.

Stop everything as Blaise saunters downstairs and snuggle with him while he wakes up. Laine is like me, once up, she’s up; Blaise is like Brian, they take about a half-hour to wake up.

Change Blaise’s diaper to another diaper or undies, depending on his pick.

Take Leilah out again with help from both kiddos. Because after 10 years, Leilah still doesn’t take care of all her business in one outing.

Ask Blaise what he wants to drink. He’s decisive, knows exactly what he wants the minute he’s asked. That’s my guy. Laine and Brian are the indecisive ones. Going through a drive-thru with Brian is excruciating (or endearing as he calls it).

Make myself coffee (that I started drinking since having kiddos), relax for about 10 minutes and chat with Brian who has come down from showering and getting dressed for the day.

Brian and the kiddos do the daily trash run around the house while I get breakfast going.

Mondays: Brian and the kiddos collect our milk order from the front porch. The kiddos list off everything we ordered, then help me make room in the fridge for everything. Which usually ends up with me doing a weekly fridge cleaning with their help.

Brian leaves for work after getting the kiddos situated at the dining table.

Watch the kiddos eat breakfast (or not, depending on their eating mood for the day) and unload the dishwasher that was most likely run the night before.

Today only: answer Brian’s call to me, which is unusual since he never calls in the morning. Listen to him tell me he was listening to NPR on his drive to work and they said West Nile Virus symptoms include a fever and headaches, and is often contracted from being in or around water. He felt this was worth me knowing since Blaise has had a temperature off-and-on the past week, has been telling us his head hurts, and is known to love playing in water. We concluded we didn’t think Blaise has West Nile Virus. I’m not a mom who takes the kiddos to the doctor for anything, and I haven’t yet for anything besides standard checkups/vaccinations in my motherhood journey. I have a feeling if Brian were the one home all the time, our doctor would be seeing the kiddos weekly.

Clean kiddos, clear table, clean up the kitchen and dishes from breakfast.

Prepare snacks and diaper bag for the day’s outing(s).

Head upstairs to make beds, rotate laundry, dress the kiddos, shower, and get ready for the day.

Now it’s time to play and have fun for the day, which the kiddos have already been doing (even when they help, they think it’s fun). I realize our morning is no more busy than anyone else’s. We’ve always had things to get going in the mornings but since having kiddos, it’s become a chore some days (usually on the days I didn’t get enough sleep, like last night … five hours) now that there are little people depending on us since they aren’t fully independent (yet). And I really can’t complain too much as Brian is the morning guy often … he lets me sleep in until he leaves for work half the time. 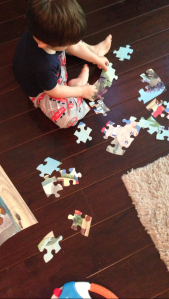 Puzzle Master Blaise and Lego Laine this morning blissfully unaware of all that Brian and I do to make their world run smoothly.

While I’m at it, evenings have their own routine too. After the kiddos go to bed, Brian and I divide and conquer the following: walk the pups; pick up the downstairs so no toys are visible; distribute a turkey slice to the animals who are elated the kiddos are in bed (Mayah is our geriatric pup who has to take daily medication so we wrap it in a slice of turkey which the cats have come to expect nightly); catch up on emails, life business, etc.; clean the kitchen and load the dishwasher to run overnight; water tomato plants; relax for about an hour; take pups out for the last time before bed; get overnight litter box from the garage; close windows and blinds; lock up the house; refill downstairs pup/cat water dish; refill cat food dish; corral pups upstairs and get gate up on our door before Mayah heads downstairs to inspect the litter box; refill upstairs pup/cat water dish; clean upstairs litter box; charge cell phones, iPad, Surface (yes, Brian seems to be the one person who actually likes the Surface and it’s not because of where he works); turn on white noise fan, plug in hall nightlight; check on kiddos; get into bed and read/browse the internet/play Candy Crush before lights out (always later than planned). Sleep to prepare for the same routine the next morning. Repeat!