Blaise and Laine had their science expo last night. This is why I love their school up the street. Since we technically homeschool, it’s nice having the Parent Partnership Program available… the kiddos get to do normal school stuff like science expos. And by normal, I mean stuff I did as a kid in traditional school. Although, in fairness, we live in such a homeschool-rich area that there are plenty of homeschool science expos we could attend. But I like the PPP. It’s a perfect fit for the kiddos and our homeschooling life. And bonus, it’s up the street.

This is their second year doing a science project, and they were much more into it this year since they knew what to expect. We asked them over a month ago to come up with a project idea. Blaise decided on water absorption and Laine, an experiment using plants…

Laine’s plan was to buy four plants and water them using different liquids: orange juice, Coke, milk, and water. Brian was supposed to start this project with Laine about five weeks ago. Brian is a procrastinator. We bought plants two weeks before the science expo when I remembered after 22 years together, Brian will always be a procrastinator. Haha. Laine still watered them in hopes she’d see some changes. Nope. Last week, she started a back-up science project: she put eggs in different liquids to see what would happen to the shells.

Laine’s final project was titled Eggshell Strength. She put eggs in five liquids: water, milk, vinegar, orange juice, and Coke. After four days, she removed them and observed the changes. The egg in vinegar was super cool. The eggshell dissolved, leaving the egg—still egg-shaped—in its membrane. We had to do some research with her to understand why this happened. And here’s where Google Home is super helpful. Laine was able to ask it questions to get answers.

Blaise wanted to do something with water absorption. He had the idea to put different materials in water. He had his question and Brian worked with him to come up how they would figure things out. They decided to start with 10 grams of each of the five materials Blaise selected: paper towels, paper, aluminum foil, cardboard, and felt. They’d submerge them in water, drain the water, and then weigh each material to see how much water absorbed. Blaise was the hands-on guy for this; Brian helped him with the data collection. And since they took chemistry at DigiPen last year, Blaise was able to understand how water molecules were absorbed. 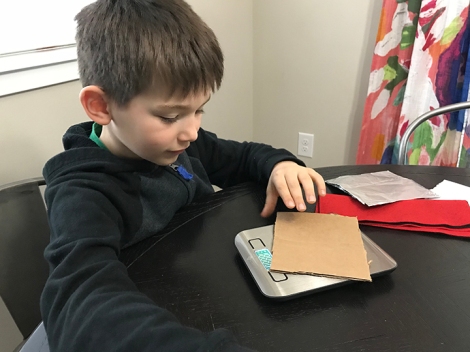 The kids are pretty amazing. They really worked hard on their projects… working on the actual experiments, understanding their results, and putting their boards together. Of course Brian and I helped them, but I’m proud to say they took the lead and did the majority of their projects. Next year, I’m going to make them do everything, typing and all. And maybe Laine will actually get to do her sacrificial plant experiment.

Lainey Bug and her final display board. She was so happy one of her BFFs was next to her. I think that may have been her science expo highlight.

Blaise and his final display board. He was quite chatty when people came around looking at boards. He spent about five minutes with the school principal explaining his project. He called all the people he spoke with customers.

There was a scavenger hunt type deal at the science expo. Each kiddo had a checklist of things to complete in order to earn a Jell-O treat. The big kiddos took off with their friends to complete the list; the little ones got to piggyback on the big kiddos’ work and each scored a treat also. The things kids will do for nasty looking, blue Jell-O topped with a gummy shark, whipped cream, and sprinkles.

As usual with anything food, Baby went to town. She was laser-focused until her cup was empty. 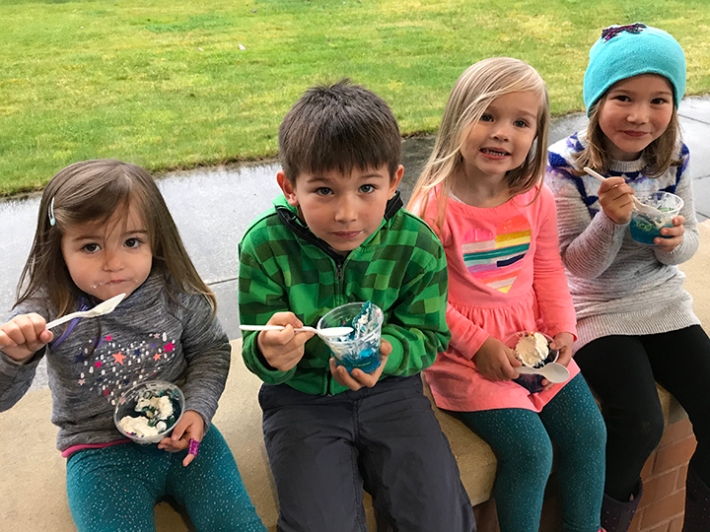 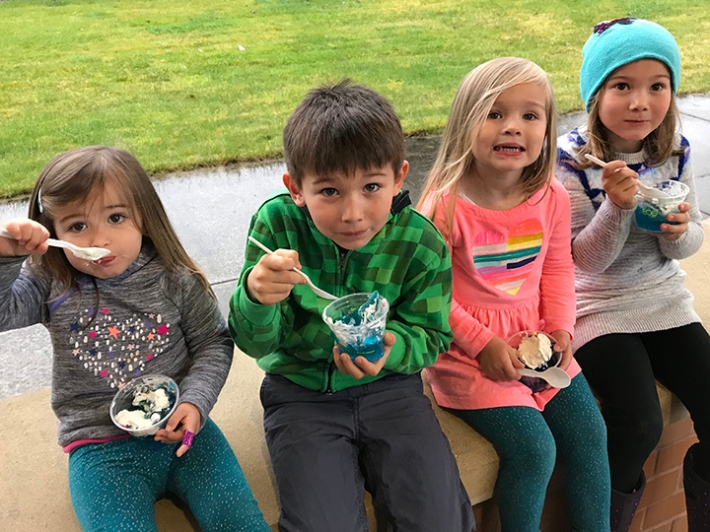