I’m back to saving random stuff from the trash and recycling piles. We have quite the stash these days: egg cartons, paper towel rolls, toilet paper rolls, yogurt containers, Amazon packaging, return envelopes (since I never have stamps because I do everything online), cardboard boxes, foam packaging, plastic sheets… all sorts of stuff.  I had stopped collecting things for a while because the kiddos hadn’t been using the stockpile. I think the novelty had worn off. And, I’ve been having them spend more time in the art room creating when I hear I’m bored so there is more of a need these days.

It was one of the three spring break weeks, Monday to be exact. Saige didn’t have dance and the big kiddos were home because it was conference week at their Monday / Wednesday school. We had a rare day of nothing planned. Being the start of the week, I was inspired to play art mom. We busted out the paper rolls and decided to make binoculars. I started with Saige and Baby and decided against announcing what we were doing to the big kiddos… I knew they’d come in once they heard us crafting. Which is exactly what happened.

We just went for it. I suppose I could have looked it up because when you Google paper roll binoculars there are so.many.pictures of the things. But I didn’t. I went ahead and hole punched about an inch from each side of the paper roll and then ran yarn through the holes before tying them together. The excess yarn was used to make the around-the-neck part. I realized I should have tied them together after we decorated them… lesson learned for next time. Blaise and Laine didn’t want any help. They did it all on their own. Laine observed me using the hole punch and yarn, and took that on herself before she decided on a different route. Blaise hot glued his rolls together.

For decoration, we used tissue paper squares I bought from Lakeshore Learning. They aren’t something I leave out because speaking of lessons learned, I used to leave them out back when Blaise and Laine were three and two. Yeah, tissue squares everywhere. We also used some decorative paper squares, also from Lakeshore Learning. And some markers. I should have made some glue like we have in the past but we used glue sticks to completely coat the tissue squares before pasting them on the paper rolls.

Blaise added some plastic from the random stuff box, cutting and hot gluing the plastic to the viewing side of his binoculars. So of course Laine added plastic and ended up gluing her tubes to the plastic, keeping them separated from each other.

All in all, a fun crafty morning. We spent over an hour working on these suckers. The plan was to take them out on the trail after lunch… until it started pouring rain. Instead, Saige took hers to outdoor preschool the next day and Thursday, and was still using them that weekend. Baby toted hers around for a few days before they completely fell apart from aggressive toddler use. Laine put hers in her school backpack to take and show her friends; I think they’re still in there. And Blaise, he’s more about the process and then likes to display his finished work. His are currently hanging in the art room. 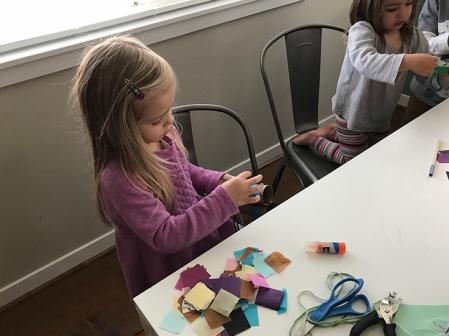 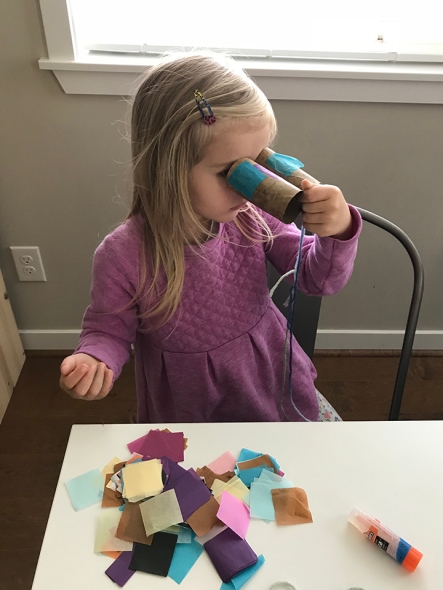 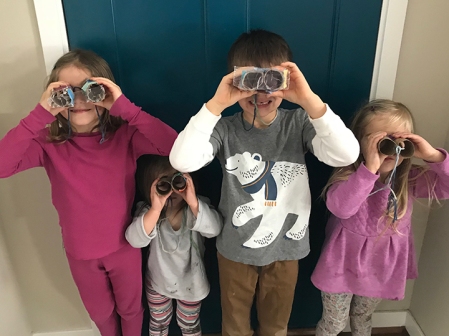 WAITING TO TAKE OUTSIDE (dang rain)