While the little ones are away, the big ones get to play. Or something like that. I’ve been wanting to check out the Chinook Bend Natural Area for a while. But some places are easier to do without Saige and Baby. This was on the without them list. And since Saige and Baby were in a summer camp for the morning, Blaise, Laine, and I headed over to check things out.

What a beautiful area. I’m not sure if it’s living amongst all the green and nature up here—instead of the flat, yellowish-brown we grew up with in California—or maybe it’s getting older and more appreciative of simple things, like natural areas, but it was super pretty there.

The big kiddos and I parked and made our way along a trail from the parking lot. It leads to a larger trail that eventually leads to Carnation Farms Road or we could continue walking straight which led us to the Snoqualmie River. We went to the river. We spent close to an hour on the shore, slowly walking along the river. Laine was interested in some cool rocks she found; she collected some small ones to put in her rock polisher. Blaise was all about throwing rocks in the river, trying to hit the rock island we named it, in the middle of the river. Laine joined in trying to make it… the kiddos were close. I was able to, which I was surprised I could throw that far. They both found wood pieces to toss in the river to see how fast the current was going. And I attempted to teach Laine how to skip rocks but I failed. I can skip them myself but trying to explain how, I find difficult.

After hanging at the river a while, we made our way back to the trail we were on earlier. We started to walk down the larger trail but had to head home for lunch before picking up Saige and Baby. We nosed around the trail as we walked back to the parking lot. The coolest part was the water covered with green moss disguising the water underneath. We tossed a few rocks on the moss to see it separate before it calmed back down and put the water back in hiding. There are several smaller trails along the main trail but they were awfully overgrown. And, some looked like they ended fairly quickly. We decided to skip exploring them this day. Next time. And maybe we’ll take the little ones with us… it’s no longer on the without them list.

Trail walkers, going toward the river.

The larger trail leading to Carnation Farms Road. The bridge can be seen in the distance.

I have no idea what this is. Maybe something weather or flooding related? Maybe an art piece? I’m clueless.

Down on the Snoqualmie River. 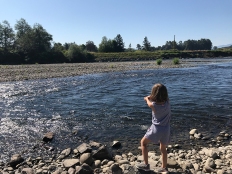 Laine attempting to get this piece of wood in the water. 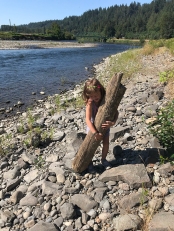 Blaise grabbing handfuls of sand and sifting them through his fist into the water.

A bug on a rock. Blaise wanted me to take a picture. He found another one of these bugs dead on a rock and announced that it will become a cool fossil one day.

Trail walkers, going away from the river.

Mossy water. It’s so pretty. In a strange way. There’s an even larger section of moss-covered water along Carnation Farms Road. 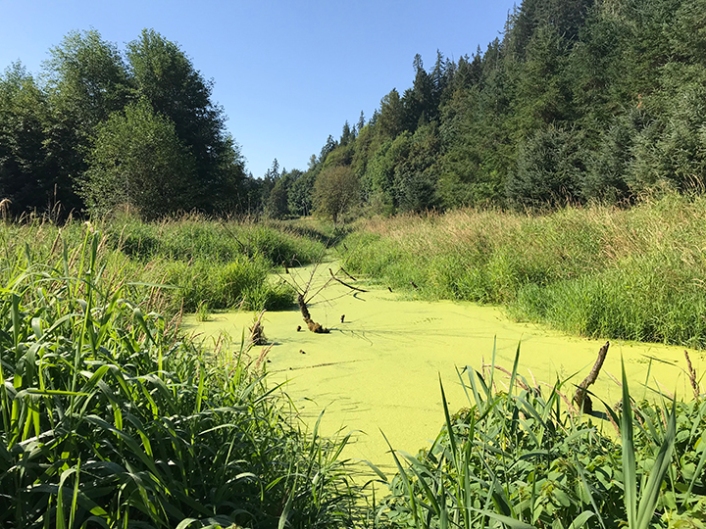 Another outing checked off the list. We’ll be back.