Seven years of Laine! I’m pretty sure this was one of our best birthdays yet. What a fun day for all. And I know it’s cliché but that whole the days are long but the years are short saying, totally true.

Laine’s actual birthday was on Thursday, July 19. She requested cinnamon rolls for breakfast. And, lucky for her, I was totally last minute and remembered the night before that I needed to buy her gifts. Duh. I do this often, which is pathetic. I know their birthdays are coming up—and I know I need to get them gifts—and yet I always end up having to go out the night before. I’m much better with Christmas. But I was out and was able to pick up cinnamon rolls. I bought the ones you make and as a backup, pre-made ones. Good thing. Between the excitment of her birthday and the chaos of getting ready for another day of summer camp for Saige and Baby, we didn’t have time to bake any. And I totally scored on the perfect gifts for Laine. It was a successful birthday eve outing.

Saige and Baby had summer camp the morning of Laine’s birthday, from 9:30am-12:30pm. The plan was to drop them off, hit Remlinger Farms, and then leave at 12:10pm to get Saige and Baby at 12:30pm… until I realized Remlinger doesn’t open until 10:30am. I thought they opened at 10am. Because 10am is a much better opening time if they want my opinion (they don’t). In hopes they were like Costco and loose with their opening time, we got there about 10:15am. Our Costco officially opens at 10am but they always open around 9:45am. My kind of store. Actually, my kind of store would open at 7am. But Remlinger was 10:30am on the dot. We were in line behind their fence when I heard the workers say it was 10:29am and that they’d open in a minute. The clock hit 10:30am and we were the first ones to pay but not the first ones in the park… season pass holders get priority, as they should. I had four Groupons for Remlinger from 2014 and 2016 that expired; I was able to use them at face value and not have to pay out-of-pocket. Score.

Once we made it inside, we decided we’d hit the roller coaster first. We knew it would get busy and wanted to check it off our list since the plan was to leave at 12:10pm. The roller coaster wasn’t open yet so the pumpkins it was. The roller coaster was open after the we exited the pumpkins. It was perfect timing… our friends who were meeting us walked over to the roller coaster as soon as we got in line. We were all able to ride the roller coaster together. The kiddos went a few times before we walked around to other rides. Time went quickly and before I knew it, it was time to leave to grab Saige and Baby. My friend offered to keep Blaise and Laine with her while I went to pick up the little ones. I took her up on the offer. The plan was I’d go pick up Saige and Baby, and then she’d meet me in the parking lot with Blaise and Laine around 1pm, and we’d call it a day at Remlinger… that’s not what ended up happening. 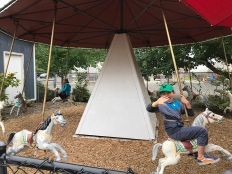 Picking up Saige and Baby is a hoot. Baby loved camp, school as she called it every day. We were concerned she wouldn’t want to be left. Nope, the first day she turned to me, said bye, and then waved as I walked away. I left and she never once cared. She was an instant pro from watching the other kiddos be left all those times. They had been up on the hill and were walking down at pickup time. “Mommy! Mom! Mommy! Mommy! Mom!” is all I heard as Baby started running toward me. Everyone heard Baby. She only runs on loud. And then Saige appeared, waving to me. They’re so cute. It was their last day of this summer camp and they clearly had another wonderful day.

We slowly made our way to the car. And by slowly, I mean turtle slow. We had to walk across the pedestrian bridge that crosses the Snoqualmie River. The bridge has slats to walk on… they are in an every-other pattern on either side, and in the middle where they meet, it’s a solid walking path. Baby would only walk on the solid part. And super slow. We were usually the first ones to leave pickup and the last ones to make it across the bridge.

Seriously, probably even slower than a turtle. And yeah, I committed the awful crime of videoing vertically. I was worried I’d drop my phone.

My view as I waited to pick them up. Such a beautiful area!

The big kiddos while I was gone. This was Blaise’s first time ever riding a pony. He’s had multiple chances in the past but zero interest. I heard he had zero interest this time also but went ahead and rode one since Laine and their friend did. 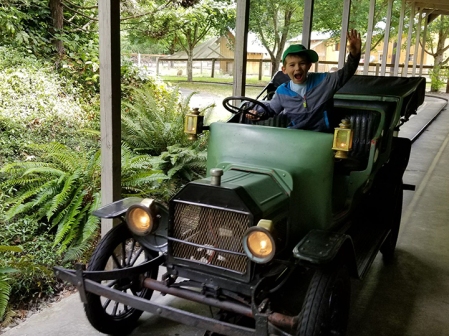 Eventually we made our way back to Remlinger. I texted my friend and asked if the big kiddos wanted to stay longer. I felt like I should take Saige and Baby inside to get their fun on. Of course the big kids wanted to stay longer… we ended up staying until about 3pm. My expired Groupons covered the entry fees for the little ones also. I take that back, I owed $1.51.

Walking to meet the big kiddos and our friends, Saige, Baby, and I hit the canoes before meeting them at the train. After the train, we walked over to the roller coaster and other rides. Our friends left about a half-hour before we did to go grab lunch and then meet us at home. I took the kiddos to the pony ride area. Baby had never been on a pony. Lucky for us, there was no line. They all rode a pony and we made one last attempt to ride the roller coaster again but the line was too long. They did the spinning barrels one last time before we called it a day.

Baby’s roller coaster face. This was her first time on one. Granted, it’s a cheesy, small roller coaster but still fun. She laughed the entire time and wanted to go again.

Clown kiddos. They all had to have their picture taken in this clown board outside of the Birthday Barn. Memories, as we had Blaise and Laine’s birthday party here two years in a row, long before Saige and Baby. 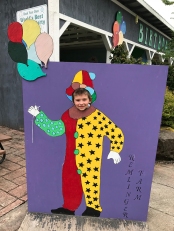 Pony girls. Saige rode her first pony at a birthday party two weeks before. This was Baby’s first time. She rode Apple, which is the same pony Laine rode for the first time back in the day.

Back home, our friends from Remlinger came over after grabbing lunch. And Laine’s friend, who wasn’t going to be able to make her birthday party because her family was going camping, came over. It ended up being an impromptu birthday party. The kiddos played for about an hour before Brian came home with a birthday cake. Laine and I had plans to make her cake but we didn’t get around to it in time, hence the last minute email to Brian asking him to grab a Costco cake on his way home.

Laine wanted Red Pepper pizza for dinner but we did things backwards since our friends needed to leave soon. We did cake with our friends, opened gifts, and then after they left, we ordered pizza. I think Laine much preferred it this way. 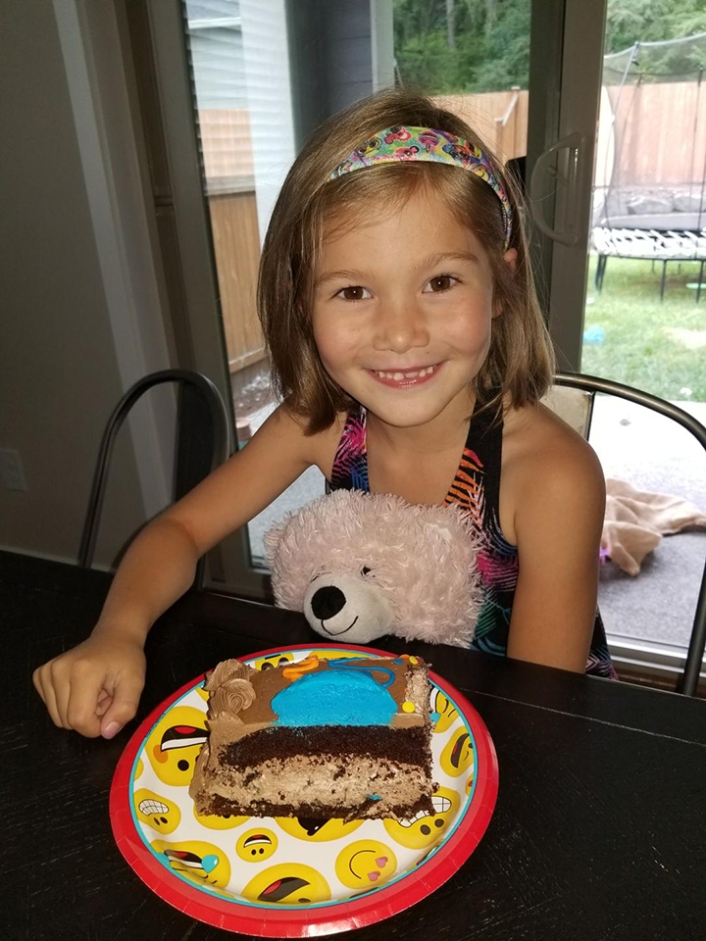 Baby helped Laine blow out the candles. And I think everyone helped her open her gifts. 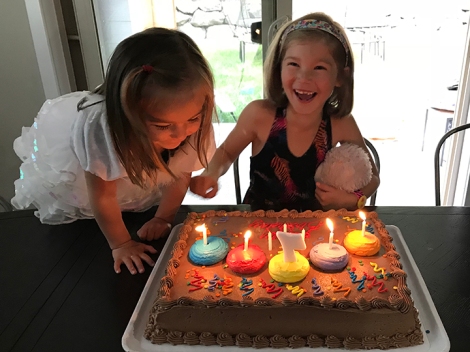 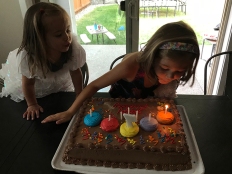 Everyone was excited and over-tired from the super fun, busy day. The kiddos were in bed by 7:30pm. I was exhausted. It was a perfect day for Lainey Bug.

I told both kiddos no home parties this year. Blaise and Laine both had home parties last year and I’m still overwhelmed from Blasie’s party. I think all together between friends and their siblings, and our kiddos, there were about 32 kids here. All wonderful kiddos, nice parents, but it was too much for me. This year, they have to have their parties somewhere. Laine selected pottery; Blaise’s will be at ninja warrior. And Saige gets a party this year, at a bounce house. Four seems to be the year we start parties.

The pottery place was an excellent pick on Laine’s part. And they run a great party. Blaise and Laine had been to a friend’s party at the same place back in May so we knew what to expect. Their friend’s mom, my friend, suggested cutting the party from the standard two hours to 1.5 hours… she said 1.5 hours would be plenty of time and that they ended up having to kill about a half-hour with all the kiddos in the party room. I took her advice and we went with a 2:30-4pm party. It was perfect. The kiddos selected their pottery and painted until about 3:20pm. After they all washed hands, we sang and had cupcakes, followed by opening gifts. We finished with five minutes left, just enough to hand out gift bags.

Laine loved her party! It was a successful party to kick off seven years. 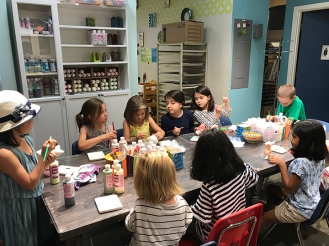