Leavenworth has finally been checked off the list. It’s one of those because we live in Washington things to do. We’ve been trying to get over there for a few years now but it’s never worked out. I think I’ve cancelled a few reservations over the years. I even know which hotels have what they call family rooms. Because when you are a family of six, there are only a few hotels that have rooms for six people. And we’ve never fibbed and crammed all six of us in a four-person hotel room. Nope, never. Technically we’ve been to Leavenworth though, if going through the McDonald’s drive-thru counts. We stopped there on our way back from fossil digging.

It was a really enjoyable trip. Better than I had expected. We nailed it with the timing… the pass was clear, traffic was non-existent, and the town was fairly quiet for a December weekend. Granted, I knew it would be busy over a weekend so we went on Thursday and left on Saturday morning. And I’m glad we left when we did. The line of cars heading into Leavenworth Saturday morning was loooong.

Back in June when I was at a birthday party for one of Saige’s friends, another friend there—who travels often in her RV, and even runs an RV rental business—recommended staying at KOAs. We had stayed at one when we went to Yellowstone. It was nice but it was still camping in my book; we had rented an RV. When I got home from the birthday party, I started looking at the KOA website. They have cabins. With bathrooms. And kitchens. Even bed linens. I was sold. I booked a Deluxe Cabin at the Leavenworth KOA for this December getaway.

We drove through the town and passed all the Bavarian-themed hotels before making it to the KOA. After checking in, we drove to our cabin for our stay. It was adorable. It’s basically a tiny house, like they feature on HGTV. Maybe 10 feet wide by about 30 feet long. It sleeps eight, with a queen bed in a master bedroom with just enough space to walk around, a bunk room large enough for the bunkbeds and a chair, a loft that technically sleeps two based on the mattresses up there but we could all easily have slept up there—with just enough headspace for Saige and Baby to stand up—and a pull-out couch in the small living area that included the kitchen, a table, and some open floor-space. The cabin felt bigger than it was thanks to the high ceilings. And bonus, it was new… built over the summer. Super clean. 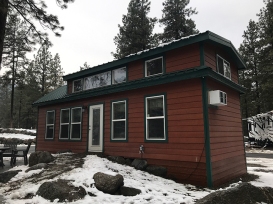 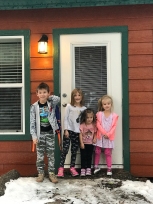 After unloading the car and settling into the cabin, we left for town. Because it was a Thursday night before the weekend crowds arrived, we easily found parking on the main drag. We ate at Rhein Haus. Why? Because they have the Impossible Burger. I had one the week before and, well it was amazing. I’ve missed a good burger since going vegetarian. The weekend before I was out to dinner in Seattle and ordered a veggie burger. When I took a bite out of it, I thought I was eating meat. I asked the waitress if there was a mistake and I ended up with meat. Nope, it was the Impossible Burger. I was sold. I wanted one again. So Rhein Haus it was. The burger wasn’t as great there though. The patio made up for it. We were surrounded by all the Christmas lights in the crisp, cold night air. And near heaters. 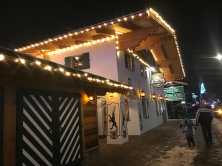 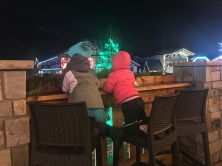 After we ate, we walked around and checked out all the Christmas lights. Apparently Leavenworth puts up over half a million lights. There is a small sledding area in the middle of all the lights. The kiddos made a note of that for when we came back Friday morning. It started to get cold and we were tired. Even when we travel, we try to stay on the kiddos’ sleeping schedule as best as possible. I know, we’re mean. Back at the cabin, we put the kiddos down to bed around 8pm after exposing them to Wheel of Fortune for the first time. It’s been years since I’ve watched. Pat and Vanna look the same. Brian and I were asleep before 10pm.

Leavenworth kiddos. A rare picture of me with all four kiddos. 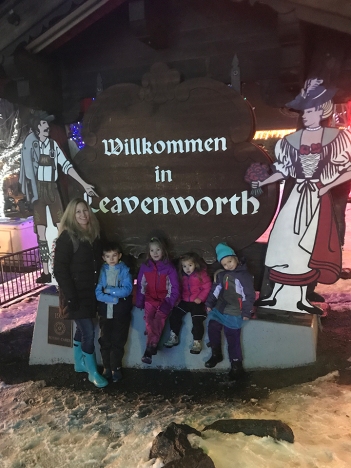 Watching Wheel of Fortune before a hot chocolate nightcap. 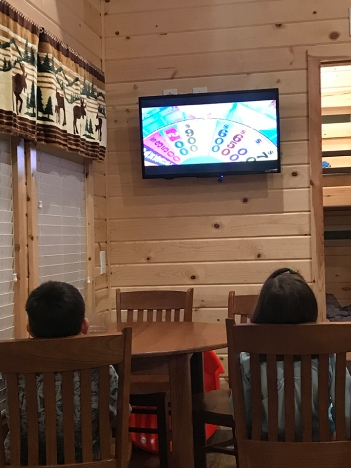 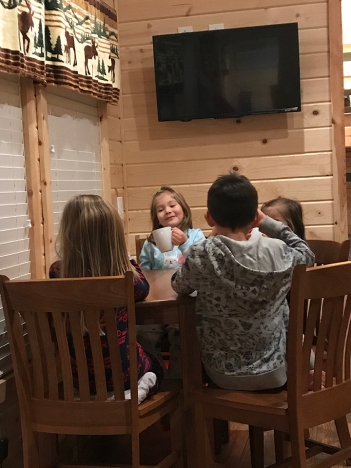 Our cabin was so cute with Christmas lights.

Friday we had breakfast in the cabin. Another benefit of staying in a cabin with a kitchen. It was a slow morning; I think I rolled out of bed around 9am. The kiddos had some downtime before we went into town around 11am to nose around. The kiddos did some sledding on the little sledding area in the middle of town before we walked the streets with all the kitschy shops. We stopped at the Gingerbread Factory for some treats. About $30 later, five of us had something to nibble on. Tourist pricing. Blaise was holding out for a caramel apple. He had seen one in the Rocky Mountain Chocolate Factory window, but they had a note on the door that said they cannot guarantee everything to be peanut-free. So we had to keep on walking. 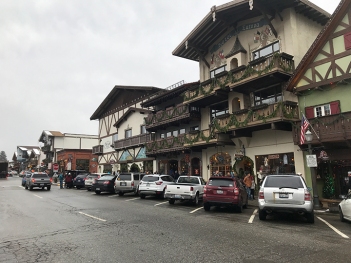 After failing at finding a caramel apple, we decided to go back to the cabin for a few hours. The plan was to head back to the main drag around 4pm for the lights and dinner again. That didn’t happen. Back at the cabin, Brian made a sledding path in front of our cabin. The cabin was on a slight hill. The big kiddos spent almost all afternoon sledding. Saige and Baby fell asleep on the bed and took a nice long nap. 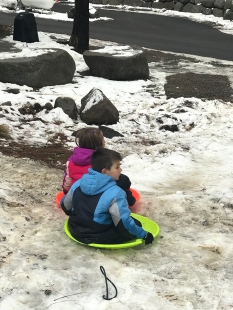 Brian took making this sledding path seriously. He moved rocks, shoveled snow and packed it in… he even worked until he perfected the end to stop the kiddos from sledding into the road.

Turns out the sledding path Brian made was a huge campground hit. All the campers driving in Friday afternoon watched our kiddos sledding. Around 4pm, we had a group of kiddos and parents out front, all sledding. Even some of the dads. Baby woke up and came out to play in the snow a bit. Saige had zero interest in getting out of bed. She watched Loud House, which was actually entertaining. It’s about a boy with 10 sisters. Our plan to head back into town for the lights and dinner faded, and we ended up ordering pizza from Rudloof’s Pizza. They delivered to the KOA. 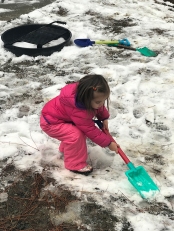 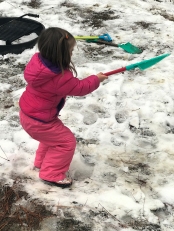 We ate pizza. The big kiddos did some more sledding. It was 8pm. Bed time. Saige and Baby fell asleep despite their long afternoon nap. Blaise and Laine were in their pajamas with the promise of watching a show in the master bed before they had to go to sleep at 9pm. About 8:30pm, we heard kids sledding out front. Blaise and Laine immediately put on their snow clothes and were sledding with the kids within five minutes. They were out there until almost 10pm. The kids who were sledding with them left to go back to their campsite for hot chocolate. They were back around 10:30pm after we had sleeping kiddos.

It was too cold out there for me. I watched the kiddos from the loft window. 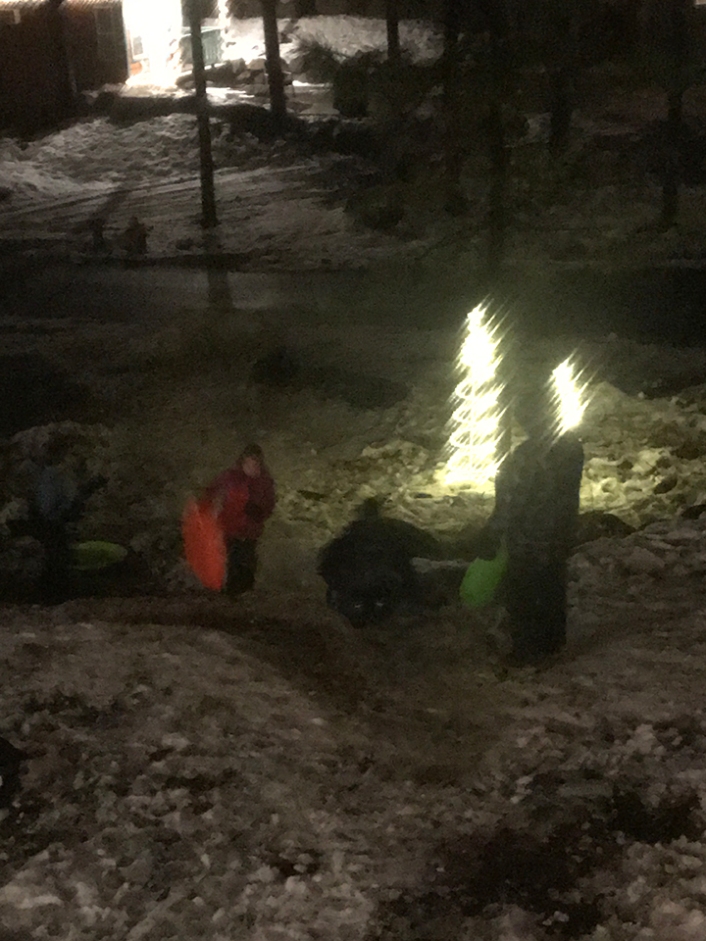 At 6:30am the next morning, there were more kids sledding on the hill. Brian peeked out the window and saw the mom telling the kids no, it was too early. Haha. Our kids were up around 8am and back at sledding after breakfast. Brian and I packed up. We had to check out by 11am and we wanted to get home. I enjoy going away; I enjoy being home more. In the hour it took us to pack up, there must have been about 14 kids sledding in front of our cabin.

We were on the road by 11am. And we were home by 1:30pm. We used a new house sitter who was amazing. We left with a clean house and came back to an even cleaner house. She even unloaded our dishwasher and folded the laundry in the dryer… which was so not expected. We just like having someone home with the critters. And every room was vacuumed, even the rooms she didn’t use. We’ll be using her again for sure.

It was a really nice trip. I think I liked most being away without feeling like I had something to do. I wasn’t home to check things off my never-ending to do list. And being in the cabin was nice and cozy, and it felt like a home base unlike a hotel room. They almost feel prison-like to me. Long hallways and shared walls, one main room for sleeping and living. Before kiddos, it didn’t matter because we would only really sleep in a hotel room. But with kiddos, we need a space to chill for downtime.

Blaise announced we need to make Leavenworth an annual thing. I concur.