Blog fail. My sole purpose for creating this blog was to keep up with posting about what happens around here so we can look back and reminisce. It’s been two weeks … and it’s a blur what we’ve done. Here’s my attempt:

Lazy cleaning days; new fridge; Ikea trips (two because I can never make just one); playdates; and lots of walks.

The kiddos at their playdate watching one of their friends leave.

For once, we didn’t make any weekend plans. We had been busy so the idea of a lazy, no plans weekend was welcomed. We checked the weather Friday night and Saturday was supposed to be nice so we decided we’d hit up Discovery Park in Seattle. It’s such a beautiful park; it somewhat reminds me of Golden Gate Park (which makes me miss California big time). It was a gorgeous day, sunny and warm. We hopped in the van, along with Mike and Katherine, and after a quick Target trip (so Brian could buy his inaugural summer shorts to wear), and a pit stop at Chipotle we made our way into Seattle with everyone else thanks to the Folklife Festival.

We ate our Chipotle on the grassy area and then packed the kiddos in their backpacks and headed toward the water (I can’t bring myself to call it a beach … it has sand and water but it’s not a true beach in my book). It’s not a strenuous hike so Blaise Daisy was able to get out of his backpack and do a little hiking himself. His idea of hiking is pointing out rocks, picking them up, and throwing them a few feet in front of him then repeating. We made it to the water after an hour or so and enjoyed the beautiful view and let Blaise run around some more in the sand this time. In keeping with his hiking skills, his beach skills also involved rocks … picking them up and throwing them in the water. Over and over and over. He had a blast. Laine just chilled on my back watching brother. After a while, we set off back toward the car with two wiped out kiddos. And by wiped out I mean a dead asleep in her backpack Laine and a Blaise that didn’t complain about not hiking on his own. The hike back was uphill so I took Mike up on his offer to carry Laine; Brian carried Blaise. 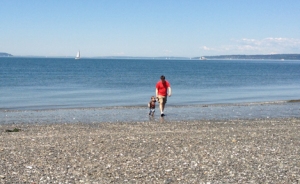 Sunday we got up early and took the whole crew to Marymoor Dog Park to tire everyone out for the day. It worked; we got home mid-morning and the kiddos took early, long naps, and the pups didn’t harass us to take them on a walk the rest of the day.

Monday Laine came down with a runny nose so we stayed close to home. Brian was on single-parent duty so I could clean out the garage. Our house has a place for everything and is clean but our garage was a disaster. We’ve been saying, “This weekend, we clean the garage,” every weekend since last summer so instead of talking, I decided to start doing. It’s super clean now and we’re committed to keeping it that way this time.

We recuperated Tuesday from the long weekend, and Laine’s nose was still stuffy so we stayed in all day. Wednesday Blaise’s nose started to stuff up so we stayed in again. The kiddos were in good spirits but I could tell they weren’t 100%. Thursday we did our weekly breakfast with our friends, followed by hanging out at their house to tire out the kiddos. Friday we had a lazy morning and an afternoon playdate, then took Blaise for a much-needed haircut.

The weekend was another lazy one; I started the weekend off with an early morning trip to Target, the grocery store, and Costco. We’re attempting to eat at home from now on so I stocked up with enough food and household supplies for a few weeks. Sunday I was scheduled for my June 5k but I skipped it. Dumb move … when I signed up for it, I thought it was in the town 10 minutes south of us. Wrong. I confused it with another town that’s 45 minutes away. Not that it wasn’t doable, it just made for a good excuse (plus, it was raining). I ran on the treadmill instead and did my own 5k plus extra mileage. Brian focused on selling the remaining garage cleaning out items on Craigslist (and our old fridge, woot!).