It was a busy  weekend with two two-year old parties on Saturday, and Blaise turning two on Sunday. The parties were a ton of fun; a morning park party and an evening backyard BBQ party. The morning party was at Ebright Creek Park, one of the better parks around here in my opinion (even though we don’t frequent it that much). It’s about five minutes from our place and once you cross a bridge leading you into the park, there is a nice open field, a few play structures, swings, gazebos, and a path leading to a deck overlooking the creek. It’s pretty much your standard park but it’s mostly confined so the kiddos can run free without having to chase them the entire time worrying they’ll go out of sight or get lost. The birthday girl’s party was in the main gazebo decorated in a fun, well-done Dr. Seuss theme, completed by her adorable outfit. Because two-year olds don’t exactly get the concept of a birthday party being any different than a play date, Blaise was more interested in the play structure than partying. Laine zeroed in on the food so she stayed close to the party action, and enjoyed her first pulled pork sandwich (which she loved). We were able to reign in Blaise under protest for cake but he didn’t protest much longer after a few bites. He and Laine demolished Brian’s slice, which made for happy kiddos. It was nap time so we said our goodbyes and headed home for naps before the next shindig. 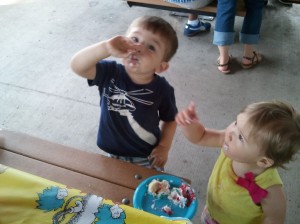 The evening party was a quaint backyard BBQ party at our friend’s house north of Seattle. As we pulled up to park we could see the enormous bounce house castle over their roof, it was destined to be a fun party. Their backyard is the perfect backyard: a nice deck, a large grass area, tall trees along the perimeter, fenced off (toddler proof), just perfect. Laine still thinks I’m going to abandon her when we go places so she sticks close to me until she’s certain I won’t leave without her; Blaise takes off. And since we often have play dates at their home, he knew exactly where he was and where all the loot was. Instead of heading straight to the backyard, he took a detour into the house to the toy bins. We were able to coax him out back and once he saw the trucks on the grass, he was ready to party. Laine was eventually confident enough that we wouldn’t leave her and partied, Blaise eventually went into the bounce house though he preferred playing with trucks and the cars he smuggled outside. Everyone had a great time; good food, nice company, and a ton of kiddos for ours to hang with. The birthday girl was a gracious host and looked adorable in her birthday dress. It was a successful party Saturday. The kids were zonked, Blaise was so tired before we even left that he kept going into the birthday girl’s bed and laying down wanting to go to sleep. We all slept really well in preparation for Blaise’s big day.

Sunday, Blaise’s birthday! We still can’t quite figure out where the last two years went. It feels about right having him this long yet it feels like he got old quick. No party this year. We don’t live near family and until he grasps the birthday party concept, we’re just going to celebrate as a family. When we were home in July for Laine’s big first birthday bash, we went to Chuck E. Cheese’s with the cousins on her actual birthday. The kiddos had a blast so we decided to keep the tradition going and go there on Blaise’s birthday. Thankfully my sister is knowledgeable in Chuck E. Cheese’s timing and said to only go when they open. We did in July and had the place to ourselves, and we did Sunday, too (almost, we shared the place with one grandmother and her two grandsons). When we pulled up and I took Blaise out of his car seat he was more interested in all the cars in the adjacent parking lot until … I walked him to the window and pointed out all the games inside. He was sold. Once inside the kiddos were super excited and we had to check out every.single.activity. Each activity is one token and we went through almost 50 tokens in 45 minutes, it was a busy 45 minutes. We ate our early morning pizza between play, then let the kiddos run around a little more before leaving at 11am. It got super busy right as we were leaving, three birthday parties and additional patrons so my sister and the other grandmother are on to something. We stopped to pick up his cake before heading home for naps. 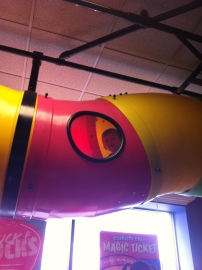 Our friends Mike and Katherine had met us at Chuck E. Cheese’s and came over after to spend the afternoon visiting while the kiddos napped. After a few hours of kiddo-free visiting, Blaise and Laine were up to visit some more and we had a standard evening. Nothing out of the ordinary; an evening walk, then dinner as usual followed by birthday cake (not ordinary), then baths and bed. It was a simple day, filled with quality family time and many smiles. And we now have a two-year old!