Thursday, September 12, 2002 we said I will to one another. I’m not a fan of I do; it’s all just semantics and personal preference but do is often used in such an assertive tone, “Do you want to go into time out?” or in a nonchalant way, “Do you want fries with that?” And do is often in the moment versus will which conveys more of long-term promise. I’m picky.

Scanned pictures! We got married before the whole get digital wedding pictures thing. We have old-school, non-Photoshopped films. 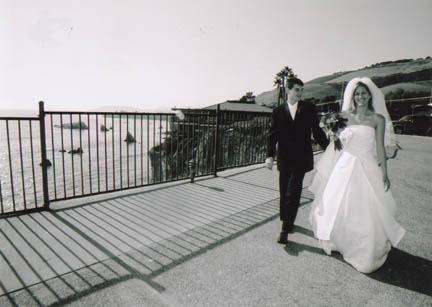 We celebrated with a mini-vacation to the Oregon Coast last week. We piled the kiddos and puppers in the van, stopped by the park to tire everyone out, dropped the puppers off at our friends’ house, then made our way down the five to Oregon (or California’s Canada / Washington’s Mexico as Stephen Colbert has said). It was an easy drive, aside from the constant varying of speed limits here in Washington. We were sure the kiddos would have no part in being strapped in for four hours but they were super travelers (which was a good test for our 11-hour drive home to California in December). We arrived around 5pm on Tuesday, settled into our room, then went to dinner. We asked the concierge for a family-friendly place within walking distance and he recommended a bar and grill on the beach. We’re not big foodies so a bar and grill sounded great. Turns out his idea of a bar and grill is a fish place and we don’t eat fish (yet we’ve always lived near the coast). Thankfully they had a few dishes that worked for us, and despite having to smell fish and watch people put lobster parts in buckets on tables, the view was awesome. And Blaise declared his official big boy status and refused a high chair and has since only sat in chairs at restaurants. He did really well that night, especially for being tired from not napping and road tripping for four hours. Laine doesn’t care where she sits as long as there is food. After dinner we went to the beach which reminded me of San Luis Obispo (sniff, sniff). We left our shoes and leftovers on the rocks by entrance path and set out barefoot on the beach. Blaise wanted nothing to do with sand on his feet, he insisted on being carried; Laine took off toward the water. Blaise eventually gave in and walked around but being the clean freak that he is, he didn’t like sand stuck on his feet. It was already past normal bedtime so we grabbed our shoes, cleaned our feet, and walked back to our room after a quick pit stop at the adjacent park with swings and a slide. And seagulls who think leftover containers are theirs to grab, and diaper bags are fair game for them to open in search of food. Daring little suckers. Needless to say, we tossed our leftovers to the birds and called it a night.

Wednesday was our anniversary, 10 whole years—almost 17 total—and I still like the guy. And I think he still likes me, too. Just a guess. We started the day with a super fancy breakfast at the ever-classy McDonald’s then went to the Seaside Aquarium. There were signs on our way to Cannon Beach so we went for it. It was fun; it’s a small little place that feels 1950-ish (at least what I imagine something 1950-ish would feel) and had seals to feed, cute little critters, and a creepy looking octopus that was friendly. The kiddos enjoyed it, Blaise got to touch a starfish and Laine’s pointer finger was in full effect. If there is ever a profession for fish pointer-outers, she’s a shoe in. After the aquarium we walked along the boardwalk, stopped in some local shops, and rode a carousel. It was approaching nap time (and we’re sticklers for sticking to routines) so we grabbed some lunch and went back to our room. The kiddos didn’t nap but we all rested and after about two hours we set out again. Our plan was to hit up a park followed by the beach, then dinner at a recommended local pizzeria. Our plan turned into sleeping kiddos within five minutes of being in the car so we drove. And we drove to the Tillamook Cheese Factory that is an hour away. Nothing says wedding anniversary like a cheese factory. Laine flirted with the workers below and mooed every time she saw a picture of a cow; Blaise was still waking up from the drive so he just took it all in. After some cheese sampling we ordered ice cream cones—one for each of us and one for each of the kiddos. Blaise wasn’t too interested, Laine ate hers, stole Blaise’s, then finished Brian’s. The kid likes ice cream. We pilled back in the van for the drive back after stopping in the gift shop for a toy tractor and a book. The kiddos were a mess from being over-tired from the late bedtime the night before and the short car nap from earlier in the day so we made the call to have pizza in. Looking back we should have just gone for it and ate out but we’re a little over-freakish when it comes to having well-rested kiddos (which leads to having well-behaved kiddos). We ate our pizza with an ocean view and settled in for the night. 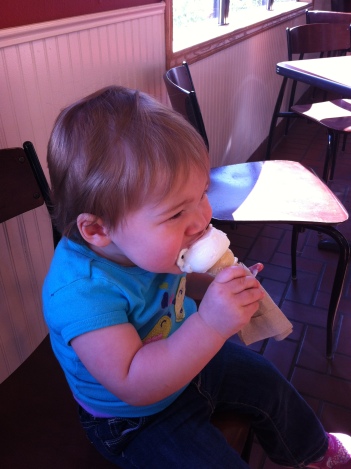 Thursday was relaxing before heading back home. It was a quick trip, we just wanted to get away from home and our constant to do lists and enjoy being together as a family. And that’s what we did. We plan on making this an annual mini-getaway to add to our family traditions list while we tack on more years to our marriage.