November. It started off with one of my favorite things, fall back daylight savings time. I love when it gets dark early; the evenings feel so much longer. And it’s cold. Dark and cold. Late fall and winter are my favorite times of the year weather-wise. Even growing up in California, I always preferred the rainy, gloomy days over the warm, sunny ones. A great start to an exciting month: the start of holiday season (including Christmas music) and we finally closed on our new house.

Lainey Bug and I had plans to go see Little Red at the Kirkland Performance Center. She loves musicals and plays, and going together has become one of our standard dates. Until the morning of, I was going to go with her. I was tired and not feeling it but about to get ready to take her when I went to shut the bedroom door and Saige had her fingers near the hinge. I had no idea she was under me. She cried like we’ve never heard her cry before. He finger had a big indentation where it got smashed between the door and the frame. Her finger swelled up. Poor kiddo. It happened to be close to her nap time so between already being tired and crying from her hurt finger, she fell asleep while I held her. That hadn’t happened in a while… circumstances aside, it was nice. I hadn’t had a chance to get dressed in order to leave on time so Brian took Laine on the date. They had a nice time. And Laine was cool with the last minute parent change.

A Monday family trip to Farrel-McWhirter was in order. Vaile had never been. The weather was supposed to be part-sunny and part-cloudy. I never understand why some days it’s partly cloudy and other days it’s partly sunny. I’m sure I can look this up somewhere, you know, that internet thing and all. Partly whatever aside, it rained. A wet, heavy rain. We didn’t have any rain gear with us. Lame on our part. We stuck it out for a bit and checked on the animals in the barn (for shelter). One of the farm workers was there and offered to get a bunny out so they could pet one. They were sold. Saige is still learning gentle and did a great job petting the bunny. We left for Costco and then home. Saige had an allergist appointment that afternoon for testing to see if she had any allergies. The week before she had some random bumps or hives all over, yet no other symptoms. Our doctor suggested it was either a viral inflection that caused the reaction or she maybe had an allergy of some sort. The result: she’s allergy-free. Laine and Blaise had dance in the late afternoon. It was a busy start to the week and month. 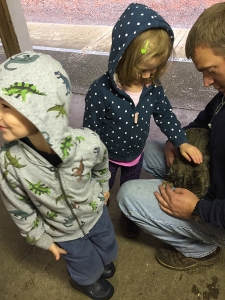 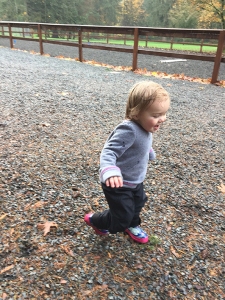 Part of every Tuesday and Thursday’s morning routine: lay out the kiddos’ school clothes. Outdoor school requires several layers (and they’re all totally worth putting on). 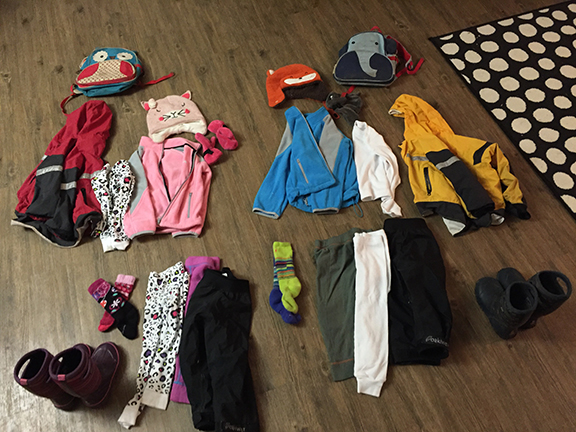 Some at-home-play (rather, at-apartment-play, it was never home). They set up boxes from our Costco trip and used LEGOs to make an animal crematorium. The kiddos aren’t morbid; we lost both Leilah and Worm this year and had them cremated. They sat on the fireplace mantle in the apartment so the kiddos would see their urns daily.

Vaile! A few early-November pictures of the latest family member. 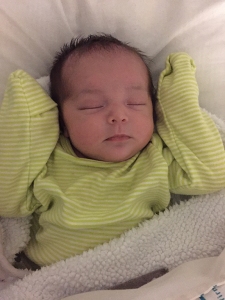 Blaise and I had eye doctor appointments. I’ve had glasses since kindergarten, and they knew I’d need them before (back in the days when they didn’t have fancy kiddo eye ware). I figured since Blaise is five, it was a good time to see if he needed anything. We had no reason to think he would other than him possibly having my bad eye genes. Perfect vision for him. And he seemed to enjoy himself despite not wanting to go at first. I needed contacts and glasses, go figure. My vision improved yet again from pregnancy. Not only am I a baby-making machine (as we tease), my vision improves and my feet shrink after pregnancy. Clearly, I’m weird. I don’t get any textbook pregnancy side-effects, I can just see my smaller feet better. 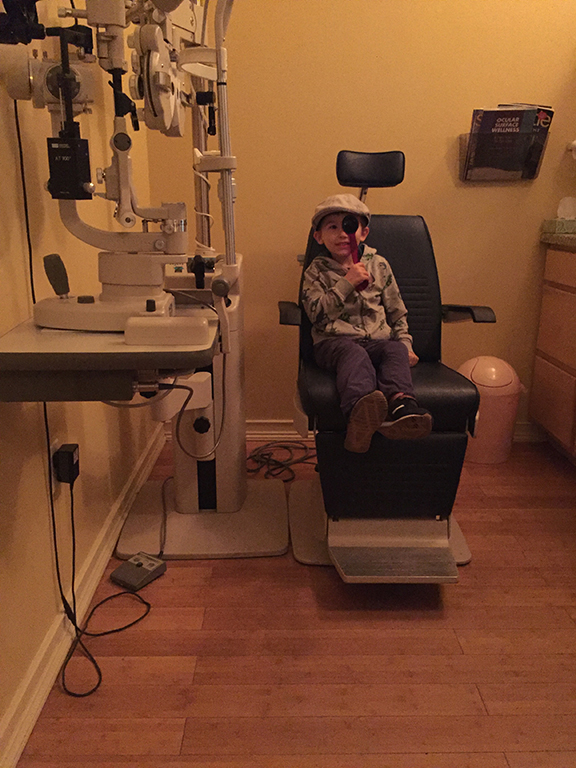 Blaise and I went back to the apartment after our eye appointments, and the plan was to go to a ski swap as a family. I didn’t really want to go—nor did Blaise—and Saige was tired. Vaile was indifferent. Laine was game. She and Brian left after we had a quick dinner. The goal was to get snowboard packages for the big kiddos. They were slightly successful; two helmets and goggles. All for under $70.

The kiddos’ preschool is at a local organic farm. Their school program isn’t directly related to the farm, it’s just held there. Twice a year, the teachers coordinate a Give Back Day (and weenie roast) to help whittle down the farm’s to-do list to thank the farm for sharing their land. Brian and the big kiddos went in the spring where Brian did manual labor for the first time since he was a teenager. And Brian and Blaise went again in November (Lainey Bug was home with a fever). Brian and Blaise helped mix cement and use it to secure rocks to wooden posts that hold up a gazebo. It was nice guy time as Blaise likes to call outings with Brian. 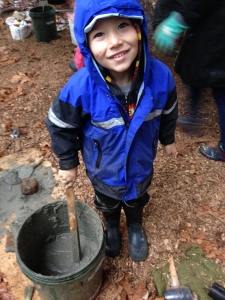 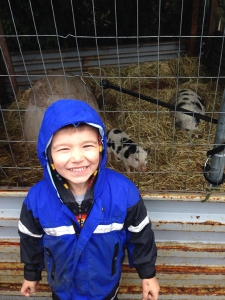 More Vaile pictures. Looking concerned (as she always does). 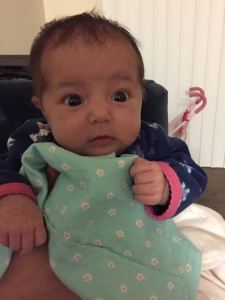 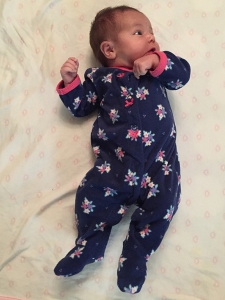 Laine loves singing. She has an innate talent. Not just vocals, memorizing lyrics. She can listen to a song once and she’s able to sing it on her own. It’s pretty impressive. I personally enjoy when she sings Escape (the Pina Colada song), “…If you like making love at midnight, in the dunes of the cape / I’m the love that you’ve looked for, write to me, and escape.” Knowing nothing about singing or choirs, I searched for one Laine could join. We aren’t church people—which seems like the logical place in my head to find a choir—so I found a local secular choir group. Sold. Laine was interested and we attended one practice to see if she’d want to join. She wanted to. So every Tuesday she has practice at a church, where there is this HGTV carpenter (fitting) looking Jesus picture that overlooks the kiddos. He could be a property brother (Brian’s favorite show). I love how Jesus is a standard-looking American white guy with a hipster beard… from the middle east. 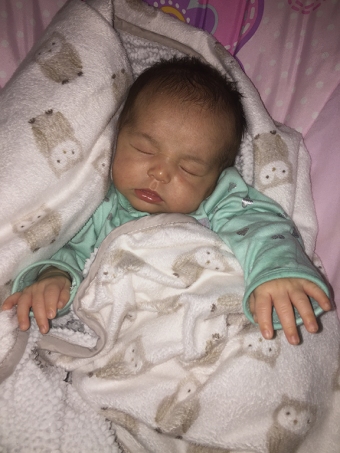 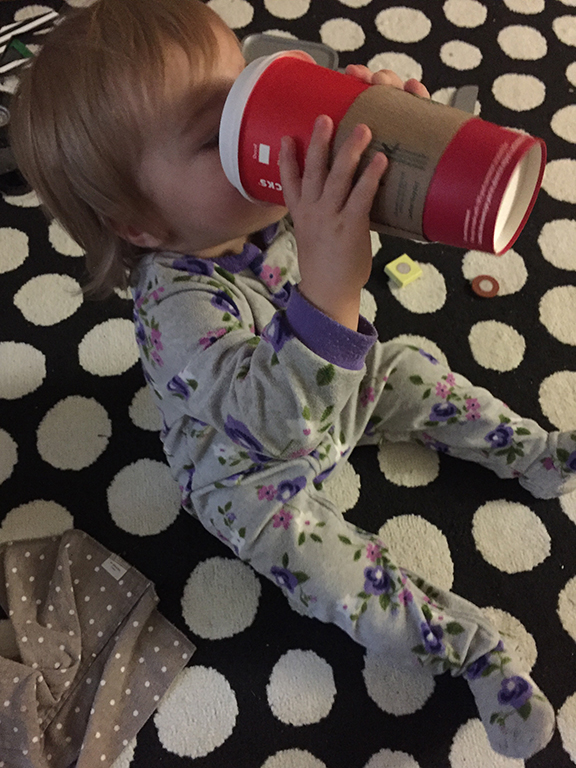 One of the benefits of the apartment was that it was right next to the Sammamish River Trail. Although we didn’t use it as much as we planned. My body had recovered from having Vaile and I was given the okay to start running again. It had been a looong time since I had. Surprisingly, I did well and was able to make it longer than I thought I would. It was pouring rain though, and all my rainy weather clothes were still in storage. I took Saigers with me. We survived the wet and enjoyed ourselves regardless. 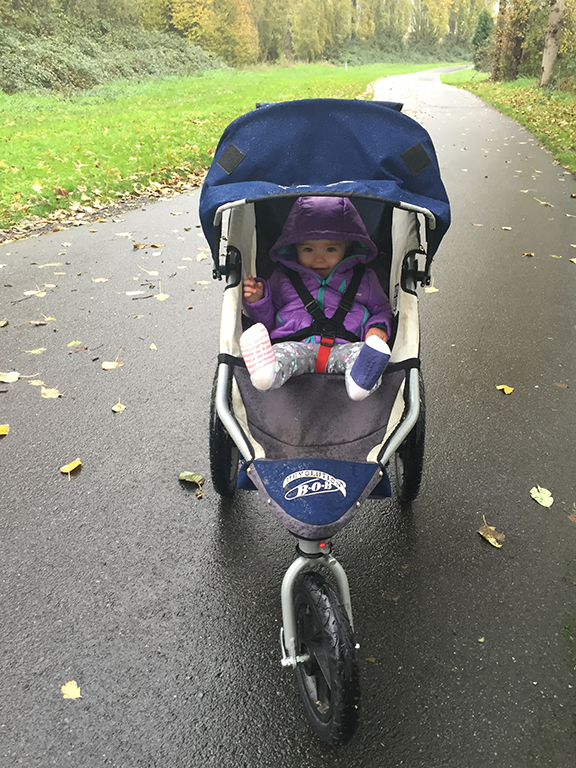 At the pumpkin patch in October, Blaise picked out a massive, heavy pumpkin. It sat on our porch until mid-November when the local squirrels decided to start eating away at the sucker. We let them for a few days before we decided it was time to get rid of the pumpkins. One of the (many) downfalls of apartment living is how to dispose of things. In our college days, the apartments we lived in had dumpsters. We (Brian) would take the trash and toss it in, no limit on the amount. The Woodinville one had a trash valet service. Sounds fancy but it felt like a way to control our trash output. Pumpkin disposal solution: take a hammer to the thing and smash it up to fit in the small valet trash can. Go, Brian for the idea. The kiddos and Brian enjoyed hammering the pumpkin. Saige watched from inside and was pretty sure she was missing out since she’s five, too. The start of an annual tradition.

More Vaile, with the start of cheeks! 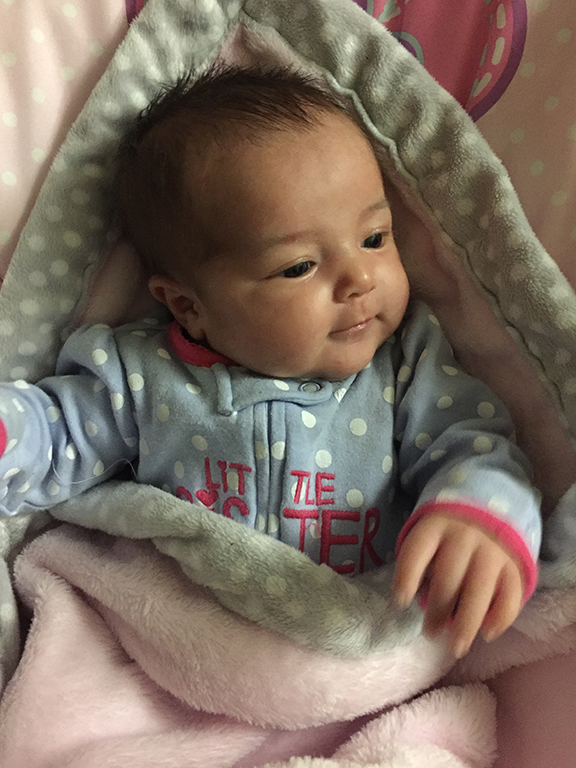 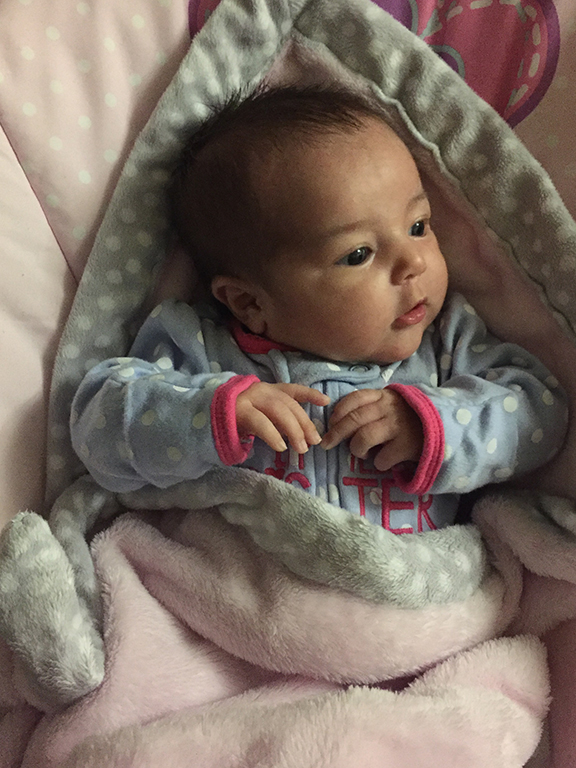 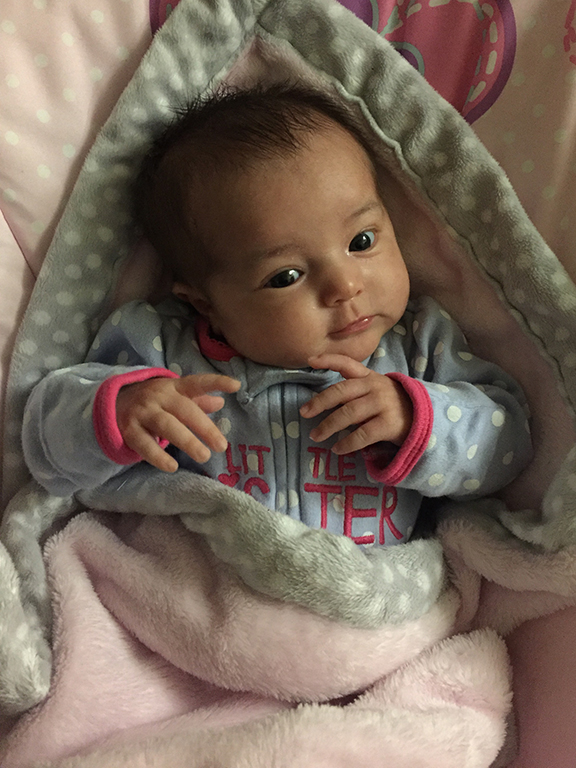 One of our last mornings in the apartment. It was a TV morning and the first time Saige showed any interest in watching, which lasted about two minutes. Blaise was still waking up and Laine was focused on Wild Kratts.

Mhoosie thinks Saige is pretty awesome, especially when she has a snack cup. They spent quite some time together, her mostly feeding him goldfish crackers. I guess cats do like fish. 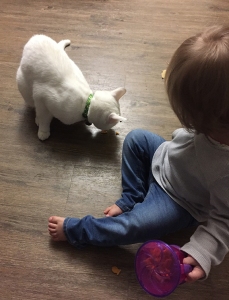 Morning of closing… what a looong day of waiting. Saige read the time away. She loves books.

What a ridiculously long process. What started out causally looking at Redfin to waiting three months longer than originally planned, we FINALY got the keys on November 20 (at 4:50pm, fitting). I’ve been putting off my blog post draft of the whole house buying process because it’s a sore subject to me.

And my couch was ready for delivery when we closed, score! It fits perfectly in the room, and I’m so happy I went with color instead of a boring old earth tone couch like I always have. Change is good.

I’ve never been to an Urgent Care in my life until earlier this year, and back again with Laine the Wednesday before Thanksgiving. She was screwing around on a metal chair and where the metal comes together on each foot, there is a little space. She got her toe caught in there. It made a circular cut around her second toe. Thankfully Brian was home because I don’t do well with blood and cuts… he cleaned and mended her toe with gauze. The cut happened around 9am and at 4pm, it was still bleeding a bit so Brian wanted her to go to Urgent Care. She wanted me to take her. She’s a trooper. She said she was a little nervous and scared but was the model patient. The doctor cleaned the wound and sealed it with glue. We were in and out in about a half hour. 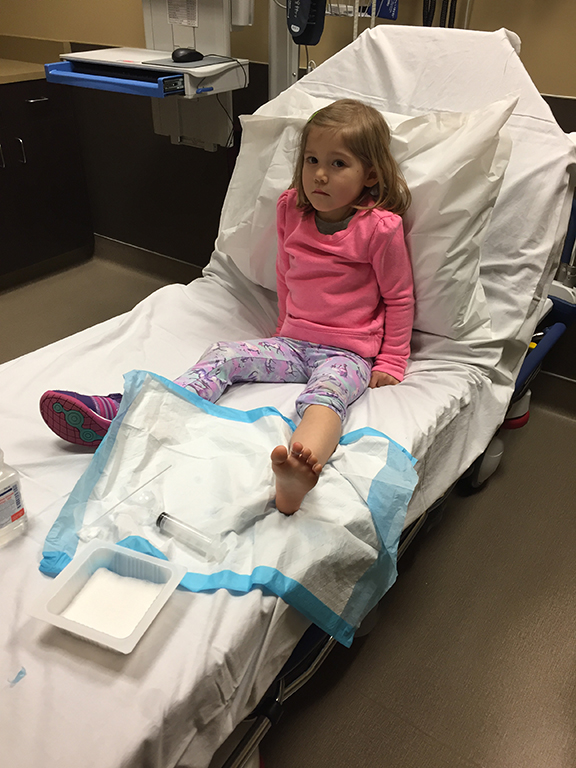 Thanksgiving was just another day. We were still living out of boxes and spending our time settling into the new house. And to make it feel even less-Thanksgiving-y, we completely forgot to thaw the turkey. So we had lasagna and chicken. The Stewarts came over and while Brian and Mike put the TV up, Katherine, the kiddos, and I played some UNO. Pretty uneventful but a nice first holiday in the new house. 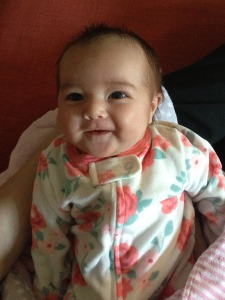 Gingerbread House Workshop. We went a few years back and loved the event. They provide a prebuilt house and set up candy buffet stations to use for decorations. There is no mess to clean up, you just leave with your houses. A parent’s dream. Saige helped this year. Next year we’ll have three houses. Vaile has no idea we even left the house. 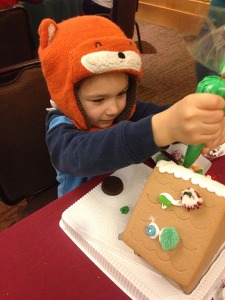 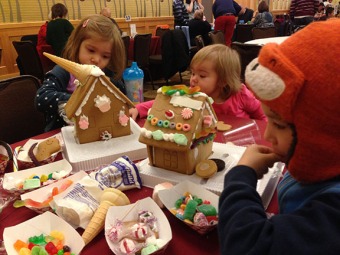 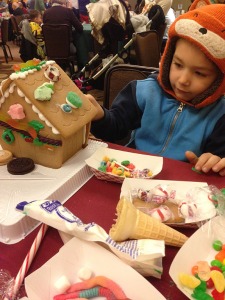 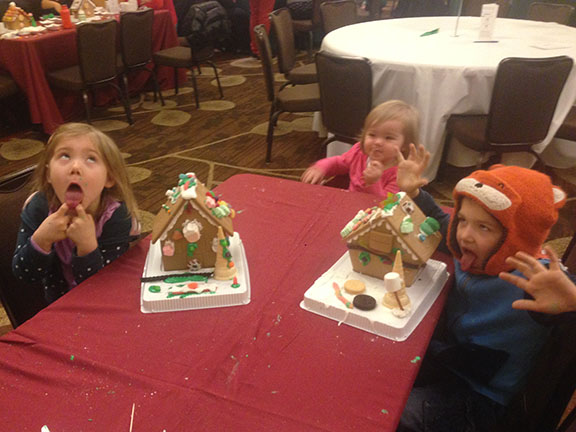 LEGOing in the new house, specifically in the Hobby Room as the kiddos call it up there.