Want: Hot Wheels Track. He says he doesn’t have one. He did have one that he didn’t play with after a few weeks so I donated the sucker a year later.
Need: LEGO Swamp Police Station. One of the few LEGO City products he doesn’t already have. It’s a need for sure.
Wear: Jedi Knight costume (with hooded Jedi robe). Brian read Star Wars to the kiddos and they are currently watching all the movies. They’re obsessed with the characters and pretend to be them when playing. I don’t get it but I’ve never seen Star Wars (and have no interest).
Read: LEGO Ideas Book. Kid is obsessed with LEGOs. Enough said.

Want: Extremely large horse she saw at Costco. I don’t normally buy in advance but, Costco. One day they have something, the next day they don’t.
Need: Doll with Elsa hair (her words) to ride her current large horses (which are tiny compared to the want sucker). We found this one and are calling it close enough. And she has brown eyes. I always try to get Lainey Bug brown-eyed dolls since the rest of the kiddos have blue eyes. I’m not sure she even notices or cares so it’s clearly my thing.
Wear: Padme Amidala costume (with hooded Jedi robe). It’s her favorite Star Wars character. Probably because she’s a princess.
Read: Horse book. This kiddo is obsessed with horses. 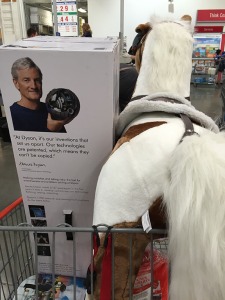 Want: Baby doll and bottle to feed the thing. I don’t know that she wants one, it’s the only toy we could think that she might want. And since she’s always trying to take care of Vaile, we figure a baby of her own would be fun. Poor Vaile, she gets a bottle nipple in her eye, on her nose, blankets over her head… a doll is perfect for Saigers.
Need: A box of diapers. Thrilling, I know. Kid will be more interested in unwrapping than what’s inside. And with the diapers out, it’s a box. One of the best gifts ever!
Wear: A super cute outfit. With stripes, like Dad. And pink leggings. I’ve never been into super cute clothes for the girls. I’m more of a onesie and sweatshirt with leggings or jeans fan for them.
Read: Zip it! She’ll have it figured out it two seconds but she’ll still love the book. She likes to grab a book, walk over, turn around, and plop in our laps (even if we don’t have a lap ready, she’s plopping).

Want: She only wants to eat, so we’ll wrap some formula from our stock pile and call it good. Having gifts for her under the tree is more for Blaise and Laine, Mr. and Ms. Equality.
Need: She gets wipes. Don’t want to duplicate Saige’s gift, haha.
Wear: A size six month outfit. With feet. Brian would be obsessed with putting socks on her otherwise.
Read: Doggies. Because who doesn’t love dogs?!

Outside of the four gifts each, we’re getting them one group gift: the Harry Potter book series. We started reading chapter books to them a while back and they love using their imaginations to envision the stories. Brian finished reading the Star Wars series of books to them, and they’re now watching the movies. He wants to start Harry Potter next… read and then watch. It’ll be new to all of us; Brian and I never hopped on the Harry Potter train.

And that’s that. Merry Christmas (from a non-Christian, haha).