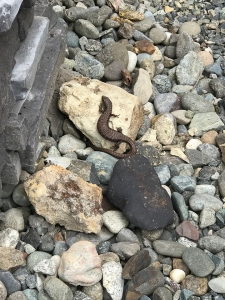 We have a lizard. Sherman. Except he’s not really ours. He lives out front under one of our house columns. And he’s the cutest little guy.

A few weeks ago, I walked past the garage column to take something to the trash. I saw something slither out of the corner of my eye. I jumped. Now, I’m not a reptile person. I would never harm any living thing but snakes, lizards—anything I put in the slithery category—and I have always had a mutual understanding. I’ll leave them alone if they leave me alone. Except that one snake who came super close to touching my hand when I was picking blackberries. Not cool, snake. I was certain I had just witnessed a snake pass me on the way to the trash cans. I made a super big circle on my way back.

The next day, I was out front and again I saw what I thought was a snake slither past the same spot. I knew we had a new resident. I investigated further. I waited a few hours and went back outside, alone. No kiddo noise this time. Sure enough, there was a little lizard hanging out on a rock. Not a snake, phew. He slithered under the column when he saw me.

The next day, I started checking on him regularly. Every time I went outside, he was sitting on a rock and would slither back under the house column when he saw me. The kiddos caught on to why I was walking out front every hour or so… hence the name Sherman. Laine wanted Lizzy, of course. Her Teddy bear’s name is… Teddy. Blaise suggested Sherman and we all agreed that was the lizard’s name. I’ve also caught the little guy slither up the house, between the siding and cement. We’re convinced he has a little bachelor pad up there, complete with a big screen television.

The next few days I went outside every hour or so, checking on Sherman. I started talking to him as I approached. It took a few days but now he stays out and lets me come over to talk with him. We’ve moved from me being able to stand and chat with him, to me being able to squat down and chat with him. Never did I think I’d be so into a lizard. I almost have an unhealthy attachment to the little guy. I check on him every morning, a few times in the afternoon, and again in the evening. He usually calls it a day around 7pm. He’s become part of my daily routine. And I’m totally okay with this. Even Brian checks on him when he leaves in the morning and comes home after work.

He went missing for a few days. We were concerned he left us after getting so much attention. I went outside every few hours and nothing. No cute little lizard warming himself on a rock. We were all sad. And then, after three days, he was back. We think he was away at a meditation retreat. But he’s not talking.

The kiddos made him a house, we put water out for him, and Brian wants to check into lizard rocks so the little guy can stay warm on cold days. I hope he sticks around for a while. He’s been a fun addition to the family… even if he has no idea that he’s a family member. 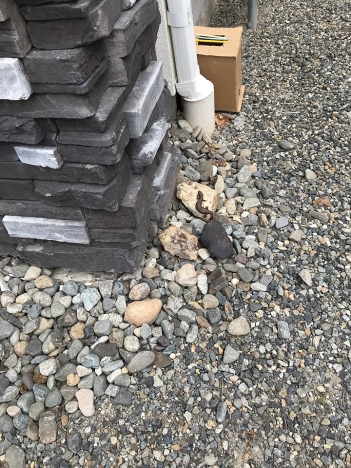 Next to his column.